The reata (or riata) was a long braided rawhide rope used by the early Mexican Vaqueros and was no doubt first introduced into Mexico by the Spanish conquerors. Reata is from the Spanish word "reatar," meaning "to retie," or "to rope," which ties one animal to another. Though the word reata is often used to refer to any rope, the genuine Vaquero reata was and is a special item. It was usually 40 to 80 feet long and made from twisted strands of rawhide. The finest riatas used rawhide strands, cut by experts, from the primest part of several young heifer hides. The hides were well chosen and properly cured. The riatas are braided in 4, 6, or 8 strands. The 8 strand, if made by a top reatero, is a beautiful article and superb for light roping. For the average hard work on large stock, the 4 strand is the best. Diameters vary according to individual preference, but the 3/8 inch riata is the one most used.

A riata can be different stiffness's (called in roping circles: lays) depending on what type of rawhide is used. For instance, bull hide makes a very stiff rope for heel roping.

The Reateros (Spanish for "rope maker") were masters at the craft of braiding reatas and all other vaquero rawhide tools. Many of these tools were truly works of art. The braiding of the riatas was not only an art form but the braids had uniformity and even tension. This was to insure durable working tool for the Vaquero. 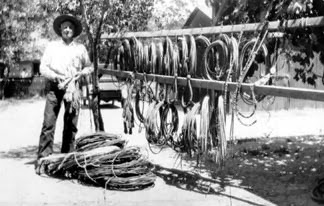 The riata was the most useful tool of the Californio Vaquero and he was highly proficient in handling it. The dexterity displayed by the Vaquero ropers impressed the early Americans cowhands and the riata was quickly adopted by them as were other items of equipment used by the vaquero. The riata can be thrown farther, with the use of less energy and retaining a more perfect loop, than any other type of rope on the market.

The Mexican way to treat a riata, to keep it supple, is to tie it between two trees. Then rub it first with lemon juice (cut a fresh lemon in two and rub the fruit along the length) and then rub it with beef fat (suet). This keeps the leather from drying out or becoming stiff. Using artificial products will make the reata too limber. Lariat is an Americanization of "la reata," Spanish for "the rope."

Reata is from the Spanish "reata," meaning "rope," but the American cowhands use it to designate a rawhide rope.
"Reata men" are hands who use a rawhide rope and they sometimes refer to this rope as a lass rope.

Rope: to throw a rope.